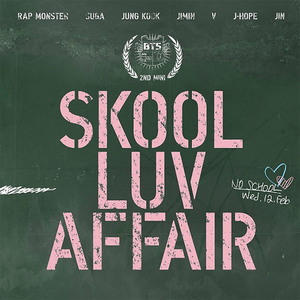 Skool Luv Affair is the second extended play by South Korean boy band BTS. The album was released on February 12, 2014. It contains ten tracks, with "Boy in Luv" as the lead single M/V, which came with its video for its "Choreography Version". On April 9, the group promoted "Just One Day" M/V, another track from the album, which came with different videos for different versions, i.e; the "Choreography Version", the "One - Take Version", the "Facial Expressions Version", and a different choreography for the "Appeal Version" . The repackaged version was released on May 14 with two new tracks: "Miss Right" and "I Like It (Slow Jam Remix)". The physical copy of the repackage album, Skool Luv Affair Special Addition, contains a total of 18 tracks with the addition of six instrumentals. On January 26 2014, Big Hit Entertainment released a countdown clock on BTS's official website and uploaded a comeback trailer on February 2 on YouTube in preparations for this album and comeback promotions. It featured a colorful array of animations flashing on the screen, accompanied by RM's rap. Three days later, Big Hit Entertainment released the track list and concept photo for BTS's upcoming album on their official Twitter account and Facebook page. They also released the design and details of the physical album which would be accompanied with its photobook and photocard. They released an album preview a day later, revealing that "Boy in Luv" would be their lead single. Big Hit Entertainment released one track, "Just One Day," on February 6 2014 for free pre-streaming ahead of BTS's comeback. They released an MV teaser of the song much later on April 2. The repackaged album, Skool Luv Affair Special Addition, was released on May 14, and comprised three discs: one CD with the songs and two DVDs about memorable moments from BTS's showcase. It consists of 18 tracks with only two new tracks: "Miss Right" and "I Like It (Slow Jam Remix)" available for digital release and six additional instrumentals available only with physical purchase. The music video for "Boy in Luv" was released on February 11, 2014. It features the members as students, acting out various scenes that showed their interest in the female lead character (Go So-hyun). On February 20, BTS released the dance version of "Boy in Luv" in the middle of promoting on music programs. The music video for "Just One Day (하루만)" was then released on April 6 in preparation for the group's follow-up promotions. The music video showed a lighter contrast from "Boy in Luv"; it featured the members sitting in the light and shadows as well as dancing with chairs on a white background. Various version's of the 'Just One Day' MV were released after the original version, such as the choreography version, the facial expressions version, etc. The choreography of "Boy In Luv" was created by GRV Crew, David Lim. Both "Boy in Luv" and "Just One Day" music videos were produced and directed by Lumpens and GDW. BTS held a press conference and comeback showcase on February 11 2014, performing "Boy in Luv" and "Jump" prior to their promotion on music programs starting February 13. The group later then revealed to continue their promotion with "Just One Day" on April 9. BTS held the first fan meeting titled BTS Global Official Fanclub A.R.M.Y 1ST Muster on March 29 and performed their new songs from Skool Luv Affair album at the concert. BTS entered Billboard World Digital Songs for the second time, sending three songs on the chart with the lead single "Boy In Luv" charted at number 5 and another single, "Just One Day" charted at 25 later during its promotion. On February 23, "Boy In Luv" was nominated as the candidate for first place on music program SBS Inkigayo awards. The album debuted at number 3 on South Korea's Gaon Weekly Chart and rose to number 1 two months later during "Just One Day" promotions. The album also peaked at number 3 on Billboard World Albums Chart, marked the first time BTS album charted on international charts, US' Billboard Chart and Japan's Oricon Chart, specifically. The repackaged album debuted at number 1 on Gaon Weekly Chart on the second week of May. Skool Luv Affair was the twentieth best-selling album of South Korea Gaon Album Chart in 2014. User-contributed text is available under the Creative Commons By-SA License; additional terms may apply.